skip to main | skip to sidebar

Apologies bears, pups and 'Aunts' for going AWL after the excitement of the Christmas Cracker Pull.
But, my Head of Hug responsibilities took precedence.
You see, Mother has had a major misadventure.
She quite literally, went missing on us on Boxing Day!!!
After she had not come home for long three nights and three even longer days, after only going to Town for I imagine more Bear Treats, I feared the worst - ABANDONMENT.
Then, this strange, swollen, black & blue bruised faced person arrived.
The Hug and I looked aghast.
The younger Hug members even hid in fright @ this strange apparition.
I, though took charge of the situation.
After bravely interrogating her, I decided it was Mother after all.
And no matter what her appearance, that we were relieved to have her back with us, even if she did smell a touch of hospital disinfectant!
Later that day someone called a Locksmith, did strange things to our front door, before presenting Mother with a bunch of shiny new brass keys.
She said we were all now safe!
Am taking her word for it.
I am also, indebted to 'Aunt' BJ, who worried, had 'Aunt' Dina call and check in on of us.
Mother is sleeping a lot, and every morning she has interesting new facial colours, personally I do not think the look will catch on.
Infact for a while, I would recommend she to wear her Blue Venetian Mask to face the outside world.
Apart from that everything is good now.
SO, onto the days business.
There was only one choice for PINE GREEN - Grizzy Bear Lee.
His 'Gotcha' place @ Three Valley Gap, BC - is surrounded by Mountain PINE's, his Canadian Sweetshirt is GREEN, and he likes to fell small GREEN PINES!
Here we are together... 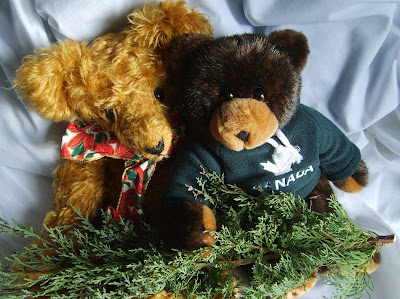 The day is so dark, we had to sneak upstairs and into Mother's bed by the window where the light was better for our photo shot, only please do not tell her.
Now you may recall that Christmas bag I had for Mother?
Here's part of it's contents - a rather special Fridge Magnet... 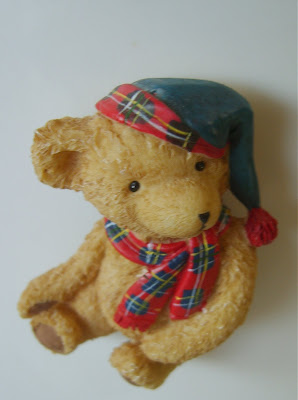 Does he not bare a striking resemblance to some bear???
Plus his hat and scarf contains, yes, PINE GREEN!
OPPS!
Almost nearly forgot, a very HAPPY NEW YEAR everyone.
May it hold every bear thing you desire that 2009 did not.
Extra warm hugs,

My Christmas Cracker event was 'cracking' success.
Master Mitch, always game, was first to show up...

I won!
Wowee!!!
Err - Sorry, got a touch carried away there!
My prize, a small notebook for my private mussings; a gold paper hat - see following pulls photo and this joke:-
"How does Good King Wenceslas like his pizzas?"
Of, course Mitch, champion pizza eater guessed the answer straight away.
"Deep pan, crisp & even!".
Next willing victim - Opps, willing participant was Willie, standing in proxy, for 'Aunt' BJ...

I lost this tug!
He got a giant paper clip for his efforts & another GREEN paper hat!
And his joke went like this:-
"What is BLACK & WHITE and RED all over?"
"A newspaper!!!"
Then, dear 'Aunt' Misses Peach >(^;^)< dropped into admire her two look-a-likes on Mother's tree... 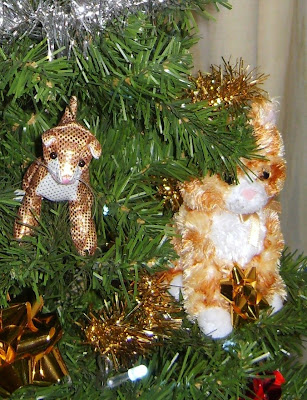 Being the gentleman Bear that I am, I allowed her to win her cracker pull - was actually thankful I did - the prize was a small vanity mirrow, a PINK hat and this joke, oh so meant for her:-
"What are BROWN & creep around the house?"
"Mince spies!"
And finally, Master Marlowe took time out from his own Hug celebrations to arrive in his Santa suit... 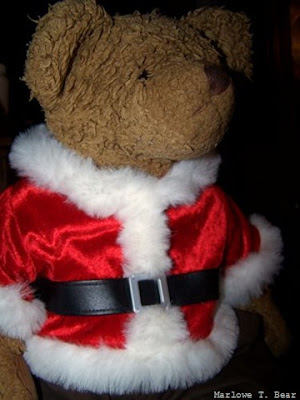 This cracker was a 'Damp Squid' as pull as we might, we got no-where.
So, we called it a dead heat.
But joke was definitely designed for us bears:-
"How do you start a teddy bear race?"
"Ready, Teddy, Go!"
Well, hope everyone has had as much fun as me today.
Will report on the Hugs and my stockings fillers later.
Am, now off to share an after dinner Benidictine liqueur with Mother.
It was a Xmas gift to her.
Made by Monks from Herbs and Honey - she finds it excessively sweet.
So, is more than willing to share with me
Yesssssssssssssss!
Hugs,

Here it is late, late on Christmas Eve and I have only just managed to post!
Mother had something called a camera battery crisis!!!
I ask you?
You would think, she would know by now that flash photography eats up the power and be prepared with a reserve stock but no!
Anyway, we or rather, I am finally back on track.
It seems those smart Airedale friends of mine, Maggie & Mitch and I had the same festive colour combination thought, that is RED & GREEN!
Do you not love my Christmas Bow, and that gift bag is for Mother... 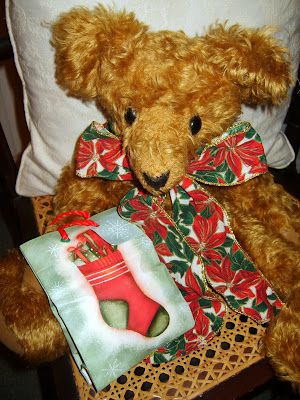 I have already hung my personally hand knitted stocking by 'Aunt' Sue up on the tree and just hope that Mrs Christmas & that Elf Bear that has taken up residence there, have Santa's ear regarding my Wish List... 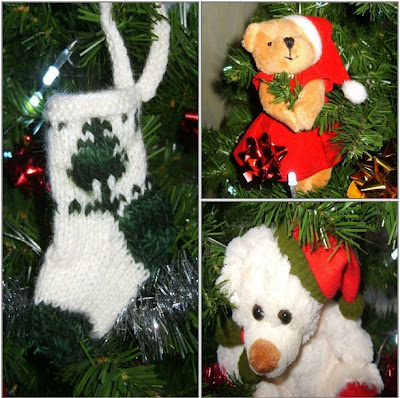 Only tomorrow morning will tell!!!
In the meantime, I send all my Bear, Cat & Pup friends and human 'Aunts' Greetings for a Merry Christmas!
Seasonal Beary Love and Hugs,

Who wants to share a Christmas Cracker with Me???

Putting my present grievances aside re interlopper Othello, I will more write on that @ a later date; I want to try in the Spirit of the Season, re create a Christmas Cracker Pull that Mother shared in 2007 with WFT Gussie...

I have set aside special crakers for the event.... 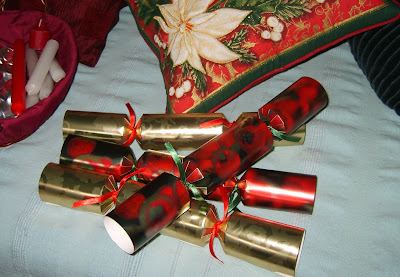 Now all I need is four friends willing to do a pull on the big day!
Surely some Bears & Pups must be game?

Posted by Poopsie aka Blue 3 comments: 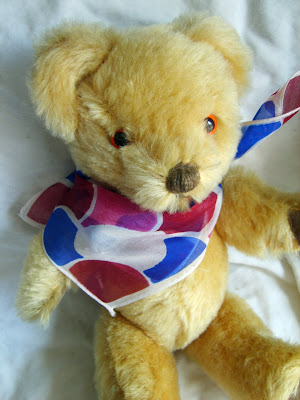 Mother's finally home, but Sir Woodstock is in a terrible strop!
His nose has been seriously put out of joint by a new arrival & rival.... 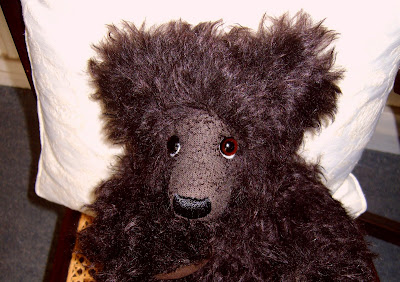 I think Othello is a sweetheart bear.
But his 'Growler' greeting did not go down well in certain quarters!
So, I asked Anna to help me out with todays post... 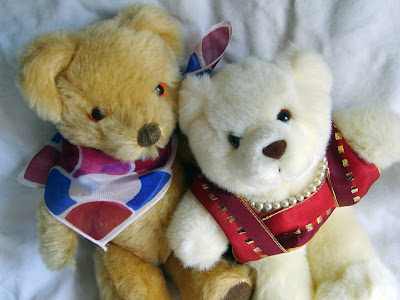 Here she is in her CRANBERRY ribbon top with her latest 'Find'... 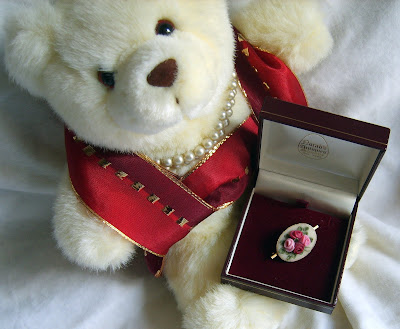 She really is a jewelery kleptomaniac!
First Grandmothers pearls, now a broach!!!
Hugs to all,

A very brief word as Mother is away from home, she's been gone a week now and still not due to return!!!
The Hug and I are using the time to rest in preparation for Christmas.
This is little Beany Miss Flower, who being AQUA, chose a nice cosy spot on Mother's stripped AQUA fleece... 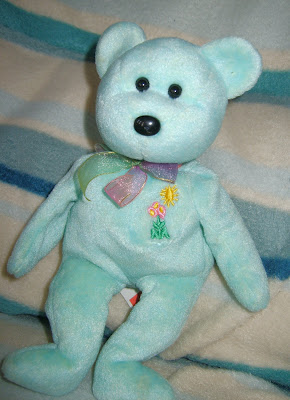 Posted by Poopsie aka Blue 3 comments:

After the excesses of my Bear-day on Monday, CREAM, especially CREAM based drinks, I can bearly, bear to think about!!!
In fact, thinking @ all is still a little difficult!
I avoided the demon LEMON as in Gin & Tonic's after last time.
Instead, I tried Bailey's Irish CREAM Liqueur cocktails @ my pawty!
NOT, a wise move, in hindsight!
First, was this simple one over ice - Mother's Christmas favourite... 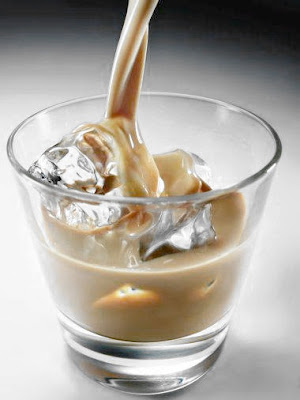 But then, I got more adventurous ... 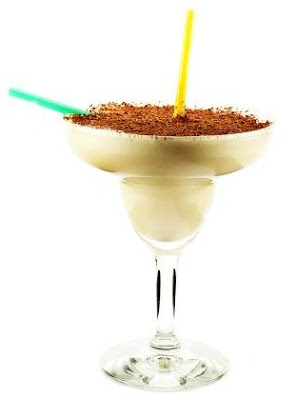 It was called an 'Ultimate Mudslide'
30 ml vodka
30 ml coffee liqueur
30 ml Irish CREAM liqueur
45 ml CREAM
45 ml milk
1/2 banana
grated chocolate
Place all ingredients, except grated chocolate, in a blender & blend until smooth.
Pour into margarita glass and sprinkle with grated chocolate.
Woweeeeeeeeeee - was that good!
After that, maybe I should have retired from imbibing and left the single CREAM shotters well alone... 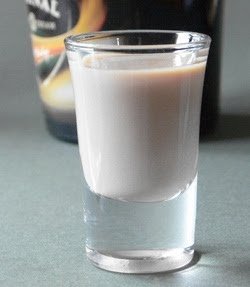 Google's images do NOT do justice to any of the drinks, all enjoyable @ the time, but seriously potent!!!
As a consequence my only CREAM bear offering today, is from Mother, who took pity on me! She found this handsome one recently, resting comfortably in a Store... 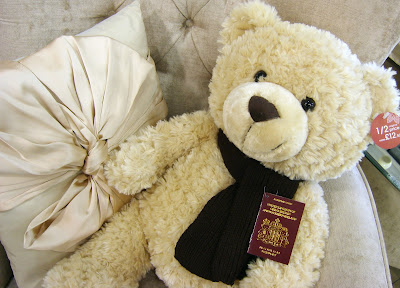 Maybe, I should buy him for her for Christmas!
Hugs,

Posted by Poopsie aka Blue 5 comments: 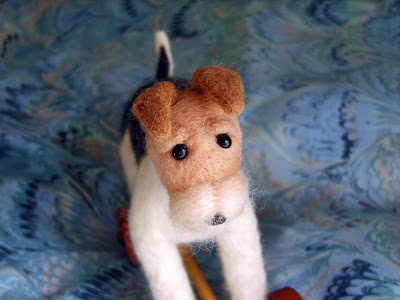 Hi, it's me Judy!
Just a quick post as I am soooo busy caring for a still poorly Mummy, an exceedingly 'tired' Woodstock, & clearing up after the pawty!!!
I imagine, you wondered where I was on Sir Woodstock's actual 1st Bear-day Celebration?
Well, dear Merry & I took it upon our-selves to help Mummy.
You wouldn't imagine to number of paw-martini's we made, even WFT Asta was impressed!
Then, there was the entrees to serve & the ice-cream to scoop out - it was busy, busy but loads of fun.
The aftermath, not so much!
Fancy pawty hats were left everywhere!!!
And, then there were the feathers to collect, due to the tipsy pillow fight between bears & 'wheelie' pups!
Thankfully, Woodstock's beloved Miss Rosie more a tea- mistress than a imbiber departed early, so didn't see that!!!
As for Woodstock him-self, he had such a 'good time' he's been sleeping it off ever since... 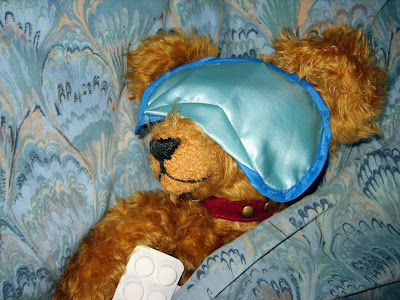 Anyway, Merry & I are finally getting on top of tidying things up!
But, what worries me is Woodstock has his first Gotch Day looming and Mother's going to be away!!!
Whispering here, hopefully, he won't remember it.
Till next time,
Foxy love & wheelie wishes

How Do You Do!

Allow me to introduce myself!
My name is Sir Woodstock, Woodstock to my friends.
I hail from the pleasant English country town of the same name and in my humble opinion from the BIG house there!

Mother who rescued me from a 'quality' Antigues Stall sites!

"A BEAR IS FOR LIFE,
NOT JUST FOR CHRISTMAS!"

- "Love is a many splenoured thing" - Dear Miss Rosie, my lady friend! 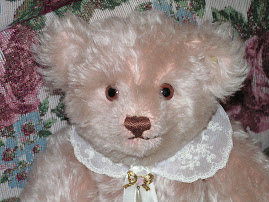 Friends who recognise me!

Bears of Distinction, a Bunny, a Dragon Princess & a Duck!

Human' Aunts' & my special 'Feline' one!

Aloysius, from the Evelyn Waughs 'Brideshead Revisited'.
He studied @ Dreamingspires for one thing!
Seen here with actors Anthony Andrews & Jeremy Irons from the 1981 television series based on the novel. 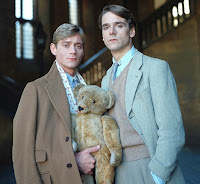 From Aunt BJ, my very first... 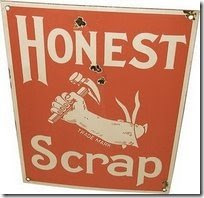 From Aunt, The Duchess... 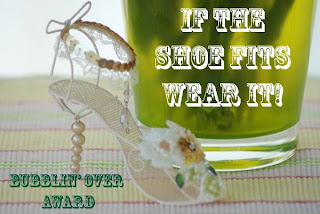 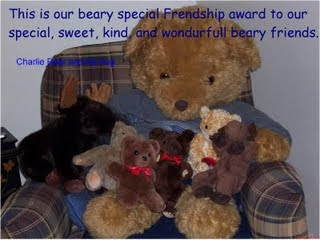 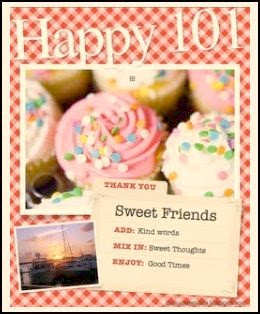